For much of February, not just Valentine's Day, Jack practices his romantic serenade for Jill.  The sounds of love are barely audible to human ears, but Jack's metallic clicking is guaranteed to drive the dogs of the manor into a barking frenzy.  If all goes according to plan, the serenade will eventually pique Jill's interest, as well.  Two Virginia Opossums (Didelphis virginiana) will be seen snuffling about the brush on frigid February evenings.  It's safe to assume they're Jack and Jill (the terms for the male and female of the species), because these mammals otherwise live a solitary existence.

The opossum's short lifespan -- rarely more than two years -- necessitates a carpe diem approach to romance.  With time a-wasting, these animals can't afford to wait until the weather turns balmy to set about the task of perpetuating the species.

In the mid-Atlantic states, opossums typically have two mating seasons:  in late winter and in early summer.  In warmer areas, there may be a third litter.  But the total number of "joeys" produced per female per year tends to be the same throughout North America.  With fewer litters, the northern Jill simply has a larger number of babies per pregnancy.

That reality poses special risks for the joeys, however.  Mama rarely has more than 13 nipples inside her ventral pouch, but her litter could number as many as 21 babies.  Numbers 14 to 21 are doomed.  Like all marsupials, the opossum starts life outside the womb as an extremely underdeveloped creature.  To survive, the blind newborn must find the pouch as soon as possible.  Once attached to a teat, the joey hunkers down, well-fed and warm, to complete its development before venturing out seven weeks later.

Scientists are not entirely sure how the joeys, looking more like embryos than creatures capable of deliberate movement, make their way to the pouch.  Toward the end of her brief pregnancy (about two weeks), mama opossum obsessively licks her belly, between birth canal and pouch.  She may be doing more than tidying up.  Drops of her saliva may serve as olfactory signposts for the newborns.

The newborns also benefit from the unique mechanics of nursing.  Once the joey starts to feed, the nipple becomes engorged and completely fills the baby's mouth.  The newborn is locked on to the teat.

In southern Appalachia, the locals never refer to Didelphis virginiana as "opossum."  The critter is simply a "possum."

The proper name derives from the Algonquian language.  Variously transliterated as "apasum" or "opassom," the original Indian term had three syllables.  Those syllables joined two Native American words:  for "white" and "dog."  By the 18th century, "opossum" had wiggled its way into the English lexicon, where it became a generic term for all marsupials -- quite a novelty to European settlers.

Things got confusing, however, when British immigrants took root in Australia, where they found all sorts of marsupials, some of which resembled Didelphis virginiana.  The English language obviously needed to differentiate between the similar-looking critters on two far-flung continents.  The Language Police decided to drop the "o" for the Australasian variants and retain the "o" for the American species, as a nod to the Native Americans who coined the original name.

Few residents of the Southern Highlands pay attention to the Language Police, of course.  The locals know that a possum is a creature of only two syllables, just as they know that the second syllable in "Appalachia" is pronounced "latch."

Putting Up with Possums

Opossums are less than photogenic.  They are often likened to large rodents.  Perhaps it's the naked, rat-like tail or the naked ears.  And let's not forget those 50  impressive teeth!

Despite the ratty image, the smallish marsupials lack the aggression of the proverbial cornered rat.  Anyone who has ever startled an opossum may doubt that claim, because the cornered animal will make an impressive show of ferocity.  It will bare its teeth, growl, hiss and drool -- in a way suggesting rabid frenzy.  If that doesn't scare off the potential predator, however, the jig is pretty much up.  Plan B is to feign death.  The effectiveness of playing possum depends on the reluctance of many predators to eat dead meat.

In the repeated encounters between my 60-pound English Setters and a cornered, 10-pound opossum, there has never been any violence.  The dogs are perfectly capable -- physically, at least -- of killing the nocturnal visitor.  But my faint-of-heart dogs take the visitor's aggressive feint to heart.  Both sides merely posture:  The opossum growls and hisses; the dogs bark.  Eventually both sides go their separate ways.

Opossums pose little threat to pets.  Yes, they can serve as vectors for parasites and disease, but remarkably less so than other animals.  They can contract rabies, but studies show a low instance of the disease, thanks to an unusually sturdy immune system and a low body temperature.  The effectiveness of that immune system is evident when an opossum crosses the path of a timber rattler or copperhead.  A venomous snake bite has little impact, beyond the immediate trauma caused by any puncture wound.

Of course, the omnivore will explore compost heaps, improperly lidded garbage cans and bird feeders that lack squirrel-proofing.  But a little human housekeeping will make the opossum search for easier pickings.

Although they occasionally dig through turf for grubs, the marsupials are not very efficient diggers -- unlike skunks.  They cause minimal damage to lawns.  In fact, they help lawn health by reducing turf-destroying insect larvae.

In other words, these critters do more good than harm.  Humans can afford to tolerate the occasional nocturnal visit of the long-snouted, toothy Jacks and Jills. 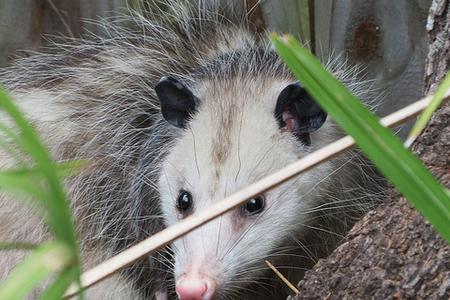