It ain't easy being a tree frog (Pseudacris crucifer) when winter drags into spring.  But you can't keep a good amphibian down for long.  The peepers got a late start, but even in this mountainous, Zone 5 climate, they're singing their socks off right now.

In a broad swath of North America -- from Manitoba south to northern Florida and west to east Texas -- few residents have not heard the spring peeper.  The little amphibian is one of more than a dozen tree frog species that make North America their home and loudly celebrate the start of the mating season.

As the ground thaws in wintry zones, peepers start moving to wet areas from their hibernation spots under logs or in leaf duff.  The boys assemble for a nightly shouting match, calling for mates.  The chorus can linger through spring.

Several other species of tree frogs don’t start promoting themselves until late spring or summer.  Meanwhile, the peepers don’t fall silent after mating, but often call to one another through the summer.  Frog song thus permeates the night air throughout the warm season.

Flattened toe-pads enable tree frogs to climb trees, shrubs and other vegetation.  Mucus secretions on those pads enhance adhesion to vertical surfaces.  Something as tiny as a spring peeper, measuring barely one inch long, needs all the help it can get to avoid predators, like fish bobbing up out of the water for a snack.

Peepers and other tree frogs wear the camouflage colors of soil and vegetation.  The coloring is typically mottled, after the fashion of bark, leaves or wilted grasses.  The peeper sports a dark brown cross on his light brown back.  But the cross is so sketchily demarcated that it’s easy to miss, particularly if further smudged by mud.

If tree frogs are hard to spot, they’re a snap to hear.  Even elderly folks who normally have difficulty discerning high pitched notes often have no problem taking in the shrill voices of peepers, because of the sheer volume and number of vocalizations.

Among tree frogs, the singing is left to the boys, whose throats are equipped with a pleated vocal sac.  The noise doesn’t originate in the sac, but rather in the larynx, as air passes through from the lungs.  The laryngeal noises set off vibrations in the vocal sac, which expands hugely, serving as an excellent amplification device.  The peeper’s song is limited to one peep on the inhale and one on the exhale, with awesome speed of exchange.

The peeping match often starts off with the lowest pitched male in the chorus.  The pitch increases as other frogs join in.  Occasionally, the individual peeps morph into a trill, a territorial signal warning a rival male to back off.

Other North American tree frogs similarly get their names from their mating calls.  Birdsong and cricket tree frogs are obvious examples.  The green tree frog’s call, however, is not referenced in his name.  Observers have often likened his bizarre voice to that of geese honking.  This observer once went searching for a wounded fox after hearing ear-splitting yelps one muggy summer night.  What she found instead was a male green tree frog, atop his mate.  The pair was perched on the side of a small, open, glass greenhouse, which served as a giant megaphone for froggy passion.

Tree frogs can make many kinds of habitats work, even though proximity to moist deciduous woodland is the ideal.  Peepers, for example, are common in wet suburban lawns and can also be found in puddled potholes on city streets.

Tree frogs can also adjust to wild swings in the weather.  Because the amphibian chorus so often starts up before winter is truly spent, the little frogs are certain to face more freezes after coming out of hibernation.  They can tolerate temperatures in the low twenties (F) for as long as five days.  They simply go dormant in natural detritus until things warm up again.

Even in spring, many North American tree frogs still have significant amounts of glycerol in their body.  That sugar, produced in substantive quantities before hibernation, works like anti-freeze, preventing the formation of deadly ice crystals in tissues.  By mid-summer, the glycerol is unnecessary and disappears from the frog’s system.

Although many tree frogs have successfully weathered human encroachment, some species are in decline.  One contributing factor is the skin’s high permeability, making the frogs vulnerable to pesticides and other toxins in both air and water.  As a result, the little frog, in addition to keeping insect populations in check, also serves mankind as a first-alert to problems in the overall environment. 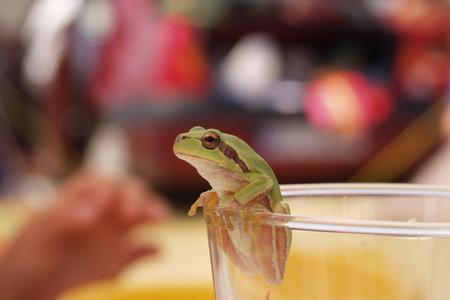