The snow was training horizontally from the north, then the east, then the west.  Such is the ricochet effect of a West Virginia mountain hollow.  On that bitter early December morning, the passerines -- squabbling over sunflower seeds at the feeder just one hour earlier -- had already retreated to the thickets.  Feathers fluffed out, the little birds needed to conserve precious BTUs.  Only one plucky bird was on the wing:  the Belted Kingfisher (Megaceryle alcyon), relentlessly patrolling the icy waters of a swift-moving mountain creek.  The kingfisher's machine-gun call was the only sound disrupting the wintry stillness.

Birding books say that the kingfisher, despite its all-season residence in much of the East Coast, is supposed to migrate from our elevated corner of Appalachia in winter.  Although some kingfishers head as far south as Panama, the bird is, at very least, supposed to be a short-distance migrant, flitting off to lower, warmer elevations in Virginia, for example.

Even such stalwarts as the Eastern Phoebe pack their bags by late November.  Unlike the local towhees and swallows, the phoebes are reluctant migrants, among the last to leave in autumn and the first to arrive in late winter.  But even a phoebe knows when to get out of Dodge.

In the West Virginia mountains, the birds that hang around for winter are typically seed-eaters and scavengers -- or mighty hunters like the Great Horned Owl or Red-Tailed Hawk.  The kingfisher fits none of those categories.

Roger Tory Peterson's Field Guide to the Birds acknowledges that this tough, jay-sized bird doesn't always heed the prevailing wisdom, particularly if there's a good source of open, fresh water nearby.  Our creek is a good source.  Although relatively shallow, it has never frozen, to my knowledge.  The speed of flow is one factor.  Another is the creek's source:  a robust spring that bubbles up inside a cave.  Both cave and spring stay well above freezing, as many a local bear has discovered.

Our creek has no shortage of fish and crawfish.  Of equal importance is its visibility.  The creek passes beneath power lines, which necessitate a wide swath of clearance within the otherwise dense canopy of trees.  In other words, the kingfisher can zip down the easement highway and readily eyeball what's taking place below.  Add to the equation the clarity of this mountain stream and Mr. Kingfisher has a good chance of spotting dinner, even as he moves at a good clip.

Despite plausible environmental reasons why a kingfisher might opt against migration, I put a lot of stock in the swagger factor.  The kingfisher is not about to be scared off by cold weather.

You can see the swagger in that ridiculously large crest on the bird's oversized head.  Those raggedy top feathers call to mind Elvis, the Fonz or a Mohawk-coiffed punk rocker.

You can hear the swagger in the kingfisher's strident rattle of a call.  The piercing quality of those notes intensifies when the bird is defending territory.  Females are as aggressive as males about chasing off perceived rivals for food.  (The assertive female is even flashier than her mate, in a striking departure from most avian species.  Both genders sport the prominent white belt around the neck and a broad gray band across the upper breasts.  But the female kingfisher has a second breast-band, of cheerful chestnut hue.)

A swaggering kingfisher occasionally bluffs its way out of trouble.  Even when staring down the beady eye of a large hawk, the kingfisher will often try to look menacing.  It will spread its wings to look larger.  It will scream in outrage.  And it will give the evil eye, by raising the white patch of feathers near the inner corner of each eye.

With that kind of moxie, it's no wonder a kingfisher won't always flee a tough mountain winter.  The birds must be doing something right.  They have survived for hundreds of thousands of years.  The oldest known fossil of a Belted Kingfisher dates back two million years. 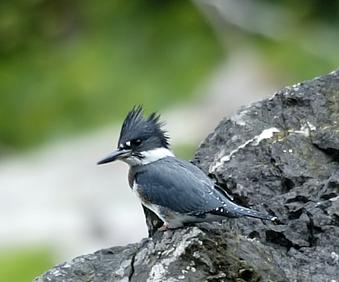