As Appalachia braces for winter's worst, the hardwood trees have long since shed their leaves.  Almost.  Birdsong has disappeared and the woods have fallen eerily silent.  Almost.

One reason for both exceptions is the American Beech (Fagus grandifolia).  It keeps its leaves, dry and dull though they may be.  In winter winds, those leaves rattle gently:  a soft echo of the noisy bustle of the growing season.  Unless a particularly nasty windstorm sweeps through beech country, those pale tan leaves will probably hang around until replaced by the new green leaves of spring.

Even in the dead of winter, beech leaves retain some of their astringent and antiseptic properties.  With precious few herbal options after snowfall, American Indians and early European settlers were grateful for the beech when they needed a poultice.  Applied to the skin, boiled beech leaves would soothe burns and frostbite.

Fresh beech leaves require minimal processing for medicinal uses.  Hikers who wander into a poison ivy patch can find some relief by scarfing up a handful of beech leaves, crushing them and applying the bruised vegetation to the skin.  The Rappahannock Indians of Virginia put a little more preparation into their remedy for a poison ivy rash.  They created a handy lotion from beech leaves steeped in saltwater.

Ointments and decoctions made from beech leaves also have topical application for skin ulcers.  Drinking a tea made of beech leaves or beech bark supposedly brings down fevers and eases the symptoms of numerous ailments, ranging from the common cold to tuberculosis.  Some herbalists of yore hailed beech leaf (or bark) tea as a general tonic, good for almost anyone -- except pregnant women, because of abortifacient properties.

Early settlers ate beechnuts to expel worms.  But there are far better reasons to sample this food source, raw or toasted.  Although somewhat bitter, the fruit of the American Beech is one of the sweetest nuts found in North America.

Ask any bear, squirrel, possum, deer or fox.  The black bear, in particular, is a beechnut gourmand.  Not only is the fruit sweet and tasty.  It's also rich in fat.  Fat-laden food is precisely what's needed before hibernation.  In a good mast year, a black bear may scramble up the tree's low branches and hunker down in a sturdy crotch.  Ensconced in this tree-house, ursa will systematically strip nuts from all the branches it can reach.  A mature beech is usually tough enough to withstand the damage.

A Tree for the Centuries

The American Beech often grows to 80 feet in height (occasionally to more than 100) and can exceed five feet in diameter.  It has very dense wood, which makes it an excellent fuel source, although the wood can be difficult to split.  Because of its inherent toughness, beech is a useful wood for tool handles, but also has value in the furniture and flooring industries.

By the time any bear settles into a beech for a feast, that tree has survived many rigors.  Half a century may pass before a "young" beech bears fruit.  The first abundant nut crop may not arrive until the tree is over 200 years old.  American Beech trees can live for four centuries.

Thriving in all sorts of climates, from Nova Scotia to Florida, the beech tree may have discovered the fountain of youth.  Not only can it be fruitful centuries after its birth.  Unlike other trees (and humans) that grow gnarly with age, an ancient beech retains smooth skin, in the form of its pale gray bark.

Is it any wonder the beech has a reputation for magic?  According to one bit of folklore, the person who stows small chunks of beech bark in his pocket is assured of good luck and prosperity.

The Versatile and Venerable Beech 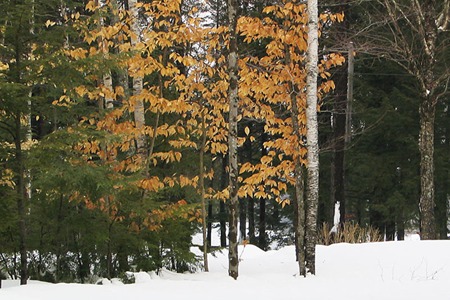