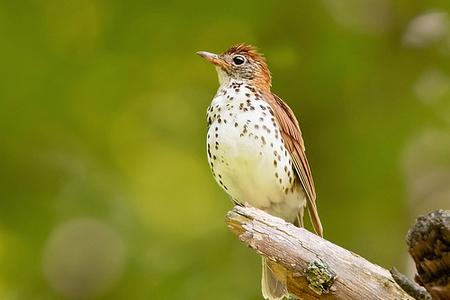 Figuring prominently among May’s many glories are the plaintive notes of the wood thrush (Hylocichla mustelina).  My West Virginia farm -- secluded, heavily wooded, with a bold mountain creek and innumerable springs -- is prime real estate for a shy bird like the wood thrush.  What’s more, the local menu offers all sorts of creepy crawly things to appeal to the insectivore palate.  That’s good news for migrating birds, which only recently made the arduous journey from wintering grounds in southeastern Mexico and Central America.

Alas, not all wood thrushes are so blessed.  Habitat destruction and acid rain are taking their toll on this species.

According to the Breeding Bird Survey, carried out by U.S. and Canadian researchers, the wood thrush population has decreased by a worrisome 43 percent in the past four decades.  For some time, ornithologists have pointed to the loss of woodland in the bird’s breeding and wintering territory, in North and Central America.

More recently, researchers at Cornell University concluded that acid rain in the eastern third of North America could be interfering with wood thrush breeding.  During the egg-laying and nestling-feeding weeks, wood thrushes need to ramp up their protein and calcium intake.  Normally, they get ample supplies of both from such yummies as millipedes, earthworms and snail shells.  Normally, those delicacies are available in great abundance in moist woods.

Acid rain, however, can leach calcium from the soil.  Calcium-deficient soil is home to fewer calcium-rich bugs, worms and snails.  In addition, acid rain retards the decomposition of fallen leaves and other organic detritus.  The denser duff makes the bugs, worms and snails harder for the wood thrush to find.

Without sufficient calcium, the female wood thrush may produce thin shelled or porous eggs and generally weak broods.  Nutritionally compromised wood thrushes may not breed at all.

Some Rays of Hope

The story is not completely gloomy.  The bird’s declining numbers are not worrisome enough to rate a listing as an endangered or even threatened species.  And there is considerable anecdotal evidence of wood thrushes adapting to suburbia.  Much like their close relative, the robin, the suburban wood thrush hops about in search of worms on mowed lawns -- where there is zero problem with excessive leaf duff.  Unlike their country cousins, suburban thrushes tolerate human proximity and may even nest in ornamental trees in a well landscaped garden.  Such nests, however, are often positioned at a higher elevation than the nests built in natural woodland.  The suburban thrushes have apparently learned a thing or two about housecats.

Many writers have attempted to describe the song of the wood thrush.  Such descriptors as “flute-like,” “lyrical” and “liquid” come close, but fall short of the reality -- which, subjectively put, amounts to the most gobsmackingly beautiful birdsong I have ever heard.

The male wood thrush is well equipped for the job of vocally staking out his territory.  Like all songbirds, he has a syrinx, or voice-box, containing two vibrating membranes.  Ace songbirds like the wood thrush can control each membrane independently of each other.  The wood thrush can actually sound two notes at once.

His vocal tricks don’t stop there.  The wood thrush’s song is incredibly complicated.  Each song typically has three distinct parts, encompassing up to 18 different patterns, according to one study from the 1950s.  The authors of that study theorized, however, that the number of wood thrush song patterns was probably closer to 100.  Other researchers have concluded that each male wood thrush develops his own uniquely identifiable song style.

Wood thrushes delight the birder's visual as well as auditory sense.  Like all thrushes, they have huge eyes -- a major asset for spotting tasty bugs.  Researcher A.A. Allen theorized back in the 1930s that those lovely big eyes explained the bird’s preference for the deep woods.  The wood thrush wasn’t necessarily shy, Allen argued; it simply found open areas uncomfortably bright.

The wood thrushes that grace this high country farm must have sensitive retinas.  Unlike their suburban cousins, the local birds rarely venture into the open.  Their arias sound all the sweeter, lending a note of mystery by resounding from the deep shadows of century-old maples, sycamores and black walnuts.