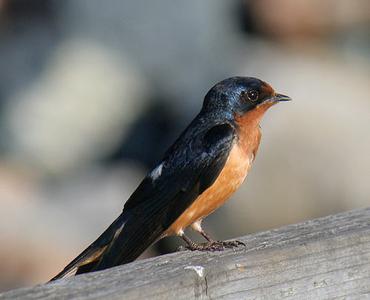 It’s anyone’s guess how long the reluctant flyer had been sitting on the fence -- more precisely, atop a stall partition in the llama barn. For a while, the juvenal barn swallow shared the perch, wing-to-wing, with an equally reluctant youngster. But within five minutes of my arrival, the companion swallow launched herself off the plywood and into her maiden flight. Now just one fledgling remained, fretfully weighing the perils and exhilaration of the great world beyond the barn.

Wishing the singleton well, I headed off with my rake and shovel. Chores took me in and out of the barn for the next hour. Each time I entered, there was Junior, monitoring everything around him, while he remained rooted to the partition. Again and again, mom and dad zoomed in, chittering at a higher pitch than normal. They would circle around their stationary offspring, zip off, return for another loop and zip off again. Their flyovers often came within inches of Junior, but he maintained his rigid grip on the plywood. Meanwhile, outside the barn, small, clumsy flyers swooped and circled and chittered with excitement: Junior’s more daring siblings.

What I interpreted as anxiety on the part of the senior swallows fueled my own impatience. But I chided myself for thinking I knew better than Mother Nature.

Weeks earlier, the swallow parents had taught me a lesson in patient nonintervention. I had finally gotten around to installing a weather-protected electrical outlet above my restraint chute. Finally, I would have convenient electrical access for grooming my llamas. Unfortunately, the swallows arrived from their spring migration just ahead of shearing time. Before I could hook up the electric clippers or the gigantic blow-dryer to blast grit out of llama wool, my new outlet was repurposed. Two enterprising swallows decided its weatherproof cover was an ideal building site. Up went the nest, crafted of mud and grass and llama wool. Little clay tentacles reached down to keep the hinged outlet cap firmly closed. There would be no powered grooming until the nest’s occupants relocated.

The swallows were quite content with their new home. Whether incubating their eggs or feeding their nestlings, the parents evinced no discomfort when a llama would pass just eighteen inches beneath them. The two species had already established a symbiotic relationship. The swallows recognized that their furry neighbors attracted a smorgasbord of flying protein. I have often witnessed a swallow bank smartly between a llama’s tall ears, scarf up a blood-sucking deer-fly and speed away. Every time, the llama -- which would have freaked had a human hand invaded that zone -- continued chewing its cud, in serene awareness of the service just performed by the feathered aviator.

Sixty-five minutes into my chores, Junior still occupied his perch. Mom and dad continued their high-pitched flyovers, but with longer intervals between zoom-ins. As their parental interest seemed to dissipate, my concern intensified.

The plot thickened. The thickener was Yam Cam, ten pounds of slouching predation. One of three cats hired to keep barn and house rodent-free, Yam Cam took her job seriously. While her feline cohorts lounged belly-up on a porch chair, she was working the edges of the tall pasture grasses, listening for the rapid heartbeats within.

She strode into the barn like a Hollywood gunslinger surveying a new saloon. The well-sited swallow nest had long eluded her reach, but the feline gymnast was more than capable of using the stall partition as a balancing beam.

Junior stood just one minute away from a lethal pounce.

Patience may be a virtue, but there are times when a superpower simply must intervene. I walked softly toward the partition. Instead of using a big stick, I drummed my fingers lightly against the plywood, about six inches below Junior. He startled. And jolted off -- awkwardly, crookedly, but without losing much altitude. Eventually, he joined his siblings surveying the pasture from the telephone wire.

Yam Cam focused on the inelegant escape, blinked, then butted her head against my shin. I obliged her with an ear-scrabble -- and contemplated the occasional virtues of impatience.