He's baaack!  Even in a Zone 5 climate, the Eastern Phoebe (Sayornis phoebe) returns from his winter foraging grounds by mid-March to reconnect with his mate and build his future.  This early in the year, the male's raspy "fizz-bee" calls have a fretful sound, perhaps signifying worry about his mate's safe return, about her acceptance of his nest site or about the prospects for their upcoming broods.

Such anthropomorphic musings may be taboo for ornithologists, but for the backyard birder, the phoebe invites empathy.  It has traits much valued among humans.

Eastern phoebes are monogamous, but not immune to marital squabbles.  That becomes apparent when the female joins her mate.  The male scouts arrive ahead of time to stake their claim to nest sites, often the same nests used in previous years.  The male will camp out around the claimed territory and ward off competitors.  He'll often add twigs to an existing construction, as he waits for wifely approval.

That hope may be in vain.  Birders often witness the finicky female chittering in exasperation as she chucks out the twigs her clueless mate has gathered.  At times she may reject the site entirely and decamp to a new spot.

Once the homestead is chosen, the female is all business.  She is the master builder, gathering clods of mud, grass, moss, fur, hair and feathers.  Construction may take up to two weeks, if the nest is built from scratch.  But even with an established nest in good condition, the female phoebe invariably makes improvements -- to minimize the impact of wind or rain or to shore up the foundation.

Her work ethic produces an architectural masterpiece that typically holds up for years.  The durability of phoebe nests is all the more amazing because of their precarious sitings.  Many nests cling to the sides of buildings, just under the eaves, with only an irregularity in the siding to serve as the horizontal support.  Others perch atop the slippery aluminum elbow of a downspout.

While other bird species are in decline as humans encroach on wild spaces, the Eastern Phoebe has largely prospered from its association with man.  Houses, barns, bridges and other manmade constructions serve as choice nest sites, especially if low brush and water are nearby, to guarantee food sources and building materials.

Measuring 7 inches long and weighing in at just 0.7 ounces, this little bird can live up to 10 years.  Researchers have retrieved newly dead phoebes that were banded a decade earlier.  Indeed, the phoebe was North America's first subject of a banding study, carried out in the early 19th century by John James Audubon himself.

In return for living rent-free under house eaves and inside barns, the phoebe repays man by keeping bug populations in check.  In the summer months, its diet consists almost exclusively of insects.  The menu includes flies, wasps, beetles and grasshoppers.  Although the phoebe is not as acrobatic as the swallow, it can readily snag bugs in mid-flight.  Mother Nature has helped with the catch by equipping the phoebe with hairy bristles at the base of the bill.  Those hairs help ensnare the target and funnel it into the bird's mouth.

Phoebes have a better chance of prospering if the humans who share their real estate leave some pockets of low brush intact.  Homeowners can further help by not disrupting those nests that pop up on downspouts and siding.  It's not all that hard to adjust painting and maintenance schedules to avoid conflict with the prime nest-building and brooding season (from March through July).

The Eastern Phoebe: Finicky, Faithful and a Master Builder 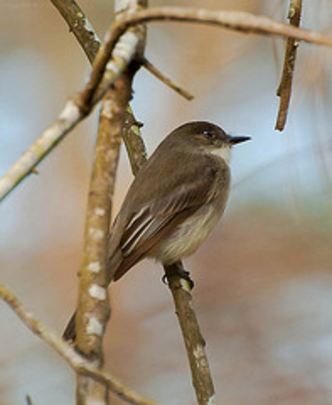