Ah, the lovely smell of bacon.

I worry about Reginald. A few more weeks remain for the seasonal bear hunt, an activity zealously pursued in my remote corner of West Virginia. And Reginald has the misfortune of standing out from the crowd. No, I’m not against hunting. Nor am I free of primordial shivers when I come across a bear. But for this particular beast I’ve developed something bordering on maternal affection.

There is nothing quite so black as a black bear. But even profoundly black bears can have white blazes -- like the dignified tuxedo markings that prompted me to christen one of my ursine visitors with an appropriately dignified name. The white blaze on Reginald’s upper chest is strikingly evident when he stands erect. It is narrow in the center, with two equal spikes on either side.

Reginald was half of a two-cub litter born in 2009/2010, a winter of many blizzards. The following summer, Reginald and his sibling occasionally romped in the densely wooded hill above our house, while their mother foraged. The cubs made a racket as they clattered up and down a large black walnut just 100 feet from the back door. Our dogs, sucking their flews in and out at the distinctive bear smell, barked up a frenzy and kept the cubs from getting any closer. Hurrying to the scene, momma sow signaled her distress by making an eerie gulping noise, resonating from deep within her massive chest. The judicious response to that noise, experts advise, is distance. This human complied, beating a slow retreat (with the dogs) inside the house. Shortly afterward, the sow collected the cubs and made her own retreat.

Transitioning from Cub to Adolescent

The sow kicks the kids out of the den when they are 12-24 months old. Only 50 percent of the yearlings survive after leaving their mother. Reginald and his sibling beat the odds. Both survived and were seen foraging in subsequent years.

The bear habitat in and around our farm is excellent. The area is sparsely settled, heavily wooded, with multiple water sources, lots of caves, dense berry thickets and thousands of nut and fruit trees. For omnivores like bears, the menu includes an abundance of small rodents and insect larvae. More than once, the local bears have done the local humans a great service by excavating yellow jacket nests, shredding bald-faced hornet condos and gobbling down all the larvae inside.

A while back, Reginald and his sibling parted company before they had achieved full growth or sexual maturity. Perhaps the instinct to stake out territory had kicked in nonetheless. Or perhaps something happened to the sibling. But Reginald is now solo. And curious.

We humans are veterans of bear country. In the years when we had llamas, we kept llama grain inside the house, instead of the barn, and delayed setting up bird feeders until well into December -- in the interest of avoiding ursine visits. Black bear attacks against llamas are rare, but happen. Desperately hungry bears have been known to kill fawns and goats and sheep.

The main ursine threat is to farm infrastructure. Despite their tree-climbing flair, bears are oafs when it comes to hurdling fences and gates. On a few occasions when the large black furballs have ventured into our pasture, they have mangled woven wire and even dismembered sturdy locust cross-stiles. So it makes sense to remove any tantalizing temptations from the area around both barn and house.

Of course, we humans need to eat, too. Being omnivores like Reginald, we eat meat. Unlike Reginald, we prefer to cook ours. And cooking results in seductive aromas, detectable outside whether or not the kitchen window is open.

Reginald’s sense of smell is seven times greater than that of a bloodhound. As the old American Indian saying goes, “A pine needle falls. The eagle sees it. The deer hears it. The bear smells it.”

The Lure of Bacon

We humans are currently (temporarily) abstaining from bacon -- for reasons that have nothing to do with cholesterol. On three occasions when those delectable rashers figured as part of the evening meal, their aroma had a Pied Piper effect on a certain bear with a striking white bib. Down the mountain he ambled for a closer sniff. Positioning himself beside the walnut tree where he once played as a cub, Reginald rose up on his hind legs and inhaled deeply.

This is a habit we are not inclined to encourage. So we let the dogs bark territorially. The cook shines a flashlight in the bear’s face, claps her hands, yells. She is careful to avoid eye contact, however, which a bear can take as a provocation requiring an aggressive response. Eventually, the disheartened Reginald shrugs down on all fours and lumbers uphill, crunching vegetation and grunting in disappointment.

Bacon is infinitely more aromatic than a pine needle.

In our neck of the woods, Reginald is not hard up for food. The very fact that he has survived into young adulthood suggests not only that he is well fed, but that he has learned to evade hunters and their Plott hounds. But just in case, we’ll avoid eating bacon for the duration of hunting season, lest the tantalizing smells overcome Reginald’s prudence. Quite soon, he will hunker down for a long sleep (technically not true hibernation, because the denned up bear can respond with surprising speed to a perceived threat). Once Reginald starts snoozing, bring on the bacon! 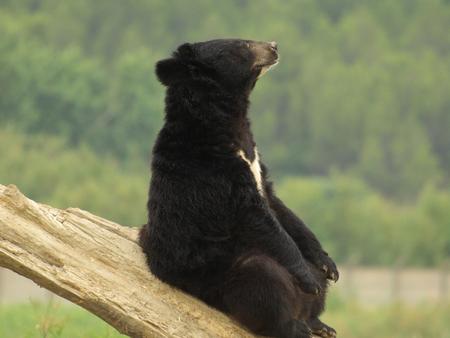