Now that autumn is thinning the leaf canopy, it's easier to spot a river otter in our wooded creek banks. That's assuming any otter cares to visit. Some years they set up house by the creek. Other years they visit with some regularity to fish there. Or a whole year can go by without any otter sightings. Why is a mystery, but only one of many regarding the North American River Otter (Lontra canadensis).

Although this species is widespread throughout our continent (except for arid regions of the Southwest), the body of knowledge about river otters contains large gaps, even contradictions.

Many scientists, for example, underscore the otter’s sociability, which extends beyond the immediate family unit and often manifests as play activities that strengthen social bonds. Other researchers emphasize the river otter’s inclination for solitude. Still other naturalists suggest the degree of sociability depends on the given otter: Some critters prefer solitude, while others like hanging out with fellow otters.

This writer’s admittedly casual experience with local river otters suggests a certain duality. But are the social otters separate entities from the loners? Or does an otherwise gregarious critter turn loner when in a grump?

One sunny summer afternoon, I witnessed a highly organized fishing expedition. Five otters of roughly equal size formed a circle in a shallow section of our pristine mountain creek and seined the water for slow-moving fish and crawfish. Several members of the group served as “beaters” scaring fish toward other otters. The role of beater appeared to rotate within the fishing party. Occasionally, one otter would loudly chitter and lunge at another, apparently to dispute claim to a given fish. But for the most part, the hunt seemed amicable, even chatty.

During 30 minutes of observation, I witnessed each of the five otters snag a fish. Some of the fishermen indulged in the same victory gargle dogs enjoy when playing with a chew toy. With mouth open, the otter would point its nose skyward, so gravity would pull the still-flipping fish toward the hinge of the jaw, to maximize leverage. After a few wet and noisy chomps, down the hatch the fish would go.

During that same summer, I repeatedly came across three to five otters hanging out in the creek. They groomed one another, wrestled (in what seemed like play, not aggression) and gently nudged one another. They seemed highly social.

Over the years, however, most of my otter sightings have involved singletons -- fishing in a spring-fed, manmade pond, close to our house, in various seasons. Perhaps the still water and limited space make the fish such easy targets that the hunt doesn’t require teamwork. On two recent occasions, two otters shared the small pond -- amicably, but without apparent cooperation. They fished different sections, about 10-15 feet apart.

In 2008, researchers from the University of Wyoming, published a study of 15 male river otters, captured in Prince William Sound, Alaska. The animals were temporarily confined together for observation of their (non-sexual) social interaction. The study yielded two odd results, for which the researchers had no clear explanation.

Various researchers have speculated that river otters derive practical benefits from social interaction. Hanging out with others of their kind may increase the chances of scarfing down more fish, scoring with the opposite sex and avoiding predators.

Does this mean river otters are more cooperative in perilous or impoverished conditions?  That might explain the greater interest in social interaction when the 15 Alaskan otters were scared, in the early stages of captivity. Then again, hanging out with other river otters might also increase competition for food and potential mates.

Is it possible that certain river otters just happen to be gregarious, while other members of the species are loners?  Just like humans?

When it comes to dat ole debbil sex, more questions surface. There’s a lot science does not know about the river otter’s reproductive life. For example, the male’s larger size does not necessarily translate into dominance over females. Female river otters occasionally act assertively toward larger males, who react submissively.

The boys typically initiate sex (in late winter or early spring), but a successful breeding requires a willing female. Her spraint (droppings) offers some olfactory clues about her receptivity. River otters are prodigious poopers. They’re not just relieving themselves, but marking territory and broadcasting all sorts of information about themselves, including sexual data. Each otter’s spraint is unique -- and a reliable identifier, much as fingerprints are for humans.

The clues provided by spraint hardly assure the male of success, however. Otherwise, why would he so often approach (and fail with) one female after the other, before he finally finds a receptive mate? Even then, foreplay is required, with the pair engaging in all sorts of aquatic gymnastics, before finally copulating, usually under water.

Copulation does not necessarily lead to immediate fertilization and implantation.  Sometimes it does, and the pups are born (blind, toothless, but well-furred) two months later. But sometimes the fertilized egg will not implant for months. No one knows precisely why. Targeting birthdates is thus tricky. The pups can arrive anywhere from two months to a year after their parents mate.

An Otter by Any Other Name…

For all the unknowns about river otters, they hardly bring to mind the term “mysterious.”  The most common adjective applied to Lontra canadensis is “playful.” How else to describe river otters chuting down snowy river banks or doing somersaults in the water?  Maybe that playfulness extends to the otter’s ability to confound researchers.

For years, the critter’s taxonomic classification was Lutra canadensis. Lutra is the name of the otter subgroup within the mustelid family, which includes weasels, minks and wolverines. But recently, scientists concluded that the New World’s fresh water otters were too different from Old World otters and the sea otters of the eastern Pacific to share the same taxonomic name. And so, the furry little acrobat swam out of the Lutra and into the Lontra gene pool. 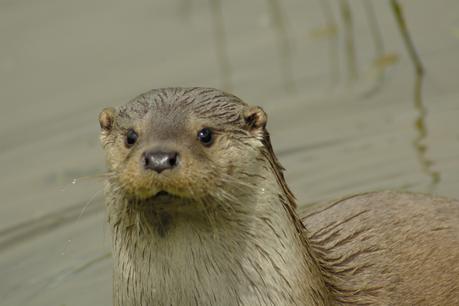