It was a bad day. I was feeding deer-flies as I weeded the herb garden off the garage. The lemon balm, in its exuberance, had strangled half of my lavender and was even giving the catmint a run for its money. Because of the drought-compacted soil, I was ripping more than weeding, which meant this patch would need re-weeding after the next rain. In my sour frame of mind, I initially interpreted a sudden, loud buzzing in my ears as a whole horde of miserable, sadistic, bloodsucking, six-legged aviators. A closer listen, however, yielded a different conclusion.

I do not speak hummingbird. But the tiny dynamos show up so often to sample the catmint and lavender that I recognize their staccato chirps and the growly buzz of their wings. I do not speak hummingbird. But I discerned alarm in these new chirps and buzzes. Looking around for an iridescent visitor, I saw nothing. Meanwhile, the buzzing became more urgent.

The sound emanated not from the garden, but from the adjacent garage -- inside the garage. More specifically, the buzzing came from a narrow storeroom within the garage. A ruby-throated hummingbird was flailing against the storeroom window overlooking my herbs. The little girl (she lacked the ruby throat of the male) had apparently zipped inside for a look and could not find her way out. What to do?

The storeroom ceiling is 12 feet high. That was where Miss Hummer now flitted, in fruitless search for an exit. How long had she been trapped and how much energy did she have left in the 90-degree heat? I retrieved a tool designed to pick apples: a plastic basket, topped by a kind of claw and affixed to a 10-foot pole. Even when the target is apples, the device is unwieldy. When the target is a desperate, highly mobile hummingbird, the tool is an accident waiting to happen.

Several attempts to nudge the bird away from the ceiling and into the basket failed, but at least shooed the hummer into the main part of the garage. There she would have a better chance of finding the large opening leading to freedom.

Instead, the terrified bird headed for the narrow space between the ceiling and the retracted garage door. There she became entangled in a large spider web -- a fortuitous development, because she could no longer zip away from my fruit-picker. But her salvation was hardly guaranteed, as she expended enormous energy trying to break the sticky silk binding her wings.

Plan B was to lower the garage door and set up the stepladder. Carefully, I climbed the ladder, with unwieldy fruit-picker in one hand. My biceps vibrated as I played out the pole, aiming for the bird. Praying I would not injure her, I gently nudged at the webs just above her head. After repeatedly missing, I finally severed the webbing. A soft plop told me the bird had fallen into the basket. Blessing the spider whose silken bonds continued to restrain the hummer and prevent yet another “escape” into the ceiling, I willed my knees to make a stiffly cautious descent, while my right arm wobbled to keep that basket upright. Finally, I was outside with my vibrating, iridescent prisoner.

At the bottom of the basket she lay, still entangled in cobwebs. With one finger I gently wiped them from her wings. She froze -- perhaps in shock, perhaps to feign death.

I searched for a likely spot for her release. The garden has no shortage of predators: assassin barn cats, oafish dogs, hawks, owls and crows, oh my!

I ducked into the shade of a large tree to ponder a solution. The bird was quiet in her fruit-picking cage, but her heart was beating visibly. Beating? No, the movement approximated unrelenting seizures. Her eyes, unfocused, blinked blindly. Without much of a game plan, I spotted a puddle of water, left from the garden sprinkler. Perhaps my prisoner was dehydrated? I dipped into the puddle with an index finger, which I then held over her long needle of a beak.

After several drops slid down the needle, her left eye snapped open to a new f-stop and looked up, focusing on the narrow, predatory set of human eyes above her head. For a heartbeat, we exchanged startled stares. Then there was a loud buzz -- and off the hummingbird zipped. Her flight path looked strong and straight. Perhaps she would recover fully from her imprisonment and clumsy rescue.

It was with a much lighter heart that I returned to savaging the lemon balm. Chuckling with self-congratulations, I envisioned myself as a kindly ogre to that little creature. “Melanie the Kind” would be known to generations of hummers, chirping out legends of past adventures. (The solitude and tedium of garden labors promote such fantasies.)

One day later, I was wrestling with the garden hose, as I prepared to water the catmint, lavender and lemon balm. As I attached the sprinkler, something brushed my right cheek. Assuming another miserable deer-fly was zeroing in for my blood, I raised a palm to swat the molester. A familiar-sounding buzz stayed my hand. There, suspended eight inches from my right eye was a female ruby-throated hummingbird. For a nanosecond, we exchanged glances. Then she dashed off.

Perhaps she was there only to sip catmint nectar. Certainly, she could have been any female ruby-throated hummingbird. But you won’t convince me of that. I know who she was and what she was saying… even if I don’t speak hummingbird. 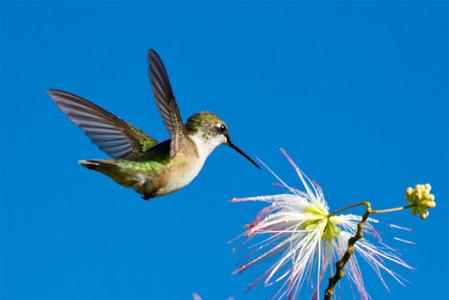 A Brush of Gratitude